The Devil’s Purse on Thursday 7th July at 7.30pm 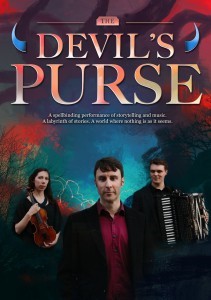 Beguiling, tricksy, highly-strung, and suspiciously helpful – the Little People are waiting in the shadows, beneath your feet, under the tables, and even in the cracks in the walls – and they’re waiting to prove just how hard it is to tell that they are there. On hot summer nights their world is a breath away and on long winter evenings they have far too much time on their hands…

Dominic Kelly, Bridget Marsden & Leif Ottosson fuse storytelling performance and music in a wild journey into the cinema of the imagination. A lost traveller finds himself guided through the mountain mists; a farmer marries an apparently perfect wife; a drunk gambles with a purse that is forever full, and an anxious mother watches her child turn into skin and bone… Come spend some time in the company of Themselves, the Gentry Below, the Good Folk, the sylphs, the sprites, the fairies, and a labyrinth of stories.

How to be a Man.
Men are in crisis. They don’t know how to be men; they don’t know what it means to be a man anymore. Now they are trying to find the right path, if it even exists.

How to be a Man is a response to the crisis of masculinity, the realization that being a man can no longer mean what it used to.

Masculinity is examined from the perspective of a white, middle-class, straight western man as he picks at the history and culture that has made him who he is. Using a combination of fictional, biographical and autobiographical stories, one man attempts to navigate the uncertain terrain of modern masculinity.

The is the story of manliness; where it’s been, where it is now and where it could end up.