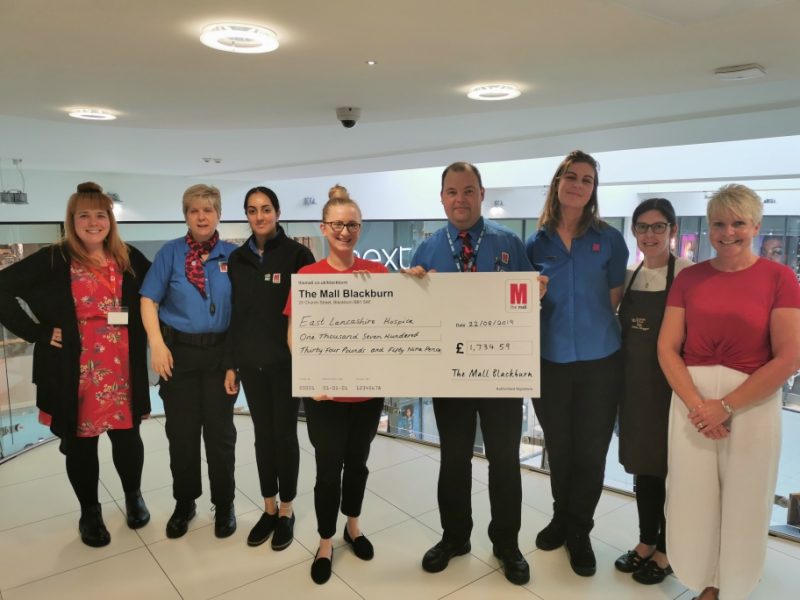 Staff and retailers from The Mall Blackburn have raised over £1700 for the East Lancashire Hospice.

They took part in a 22-mile walk from Blackburn to Clitheroe in the pouring rain earlier in the summer and have been busy collecting sponsor money throughout August.

The team from Mr Simms Olde Sweet Shoppe, Millie’s Cookies and Thorntons as well as management, security, housekeeping and customer service staff from The Mall.

Organised by Ken Shaxon, who is a member of The Mall’s Security team, the event has been months in the planning and Ken was originally hoping to reach a £1000 target.

He said: “We were absolutely over to moon to raise so much money for the East Lancashire Hospice and I want to thank everyone for their kind donations.

“The cheque presentation was a very special moment and I can safely say that all the hard work that went into organising the walk was more than worth it!”

Loraine Jones, General Manager at The Mall Blackburn, said: “I would like to congratulate Ken and his team of fellow walkers on such a fantastic achievement.

“Every penny really does count for the East Lancashire Hospice and I am extremely proud of everyone that took part!”