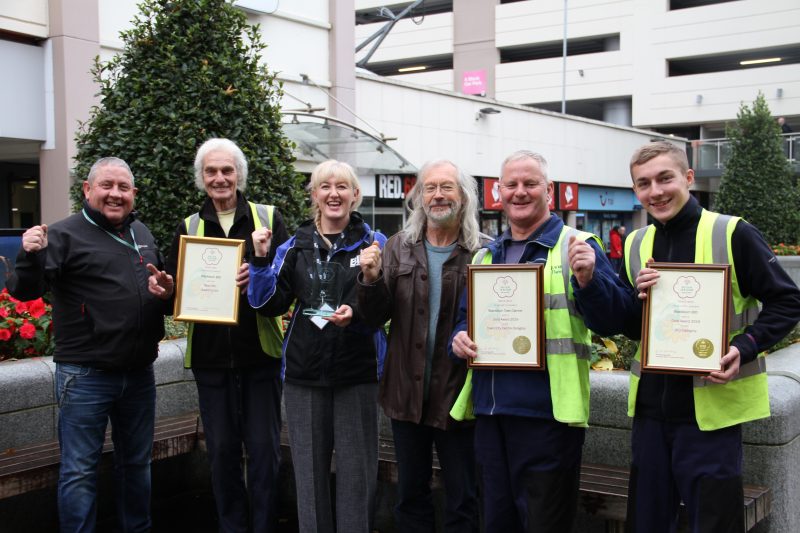 Organisers of Blackburn in Bloom cannot be-leaf that they have been crowned winners of two categories in this year’s Britain in Bloom North West Awards.

At a prestigious ceremony in Southport, Blackburn in Bloom – a partnership between Blackburn with Darwen Council, Blackburn BID, and the volunteers of Blackburn Horticultural Society – were crowned winners for the ‘town centre’ and ‘BID’ categories and went on to win ‘Best BID’.

The team were presented with certificates and trophies by representatives from the Royal Horticultural Society and will now go through to the Britain in Bloom National Awards in 2020.

This latest haul of awards means Blackburn In Bloom has retained its winning streak ­– after scooping the top prize in its category for the last three years.

The Council’s green team have been working tirelessly to look after the displays, ensuring that they are watered and fed during the growing season.

The scheme was supported financially by Blackburn Business Improvement District (BID) who have funded additional floral displays and their maintenance.

Catherine Price, Blackburn BID Manager, said: “We are thrilled to have won two gold awards and recognition as the best BID at this year’s Britain in Bloom North West Awards. It is a credit to the Council’s dedicated gardeners who have shown so much care and attention to the displays. We have been overwhelmed with all the messages from visitors commenting on the displays.

“Ultimately, we want to attract more people into the town centre and we are doing that by making sure it looks beautiful. We are incredibly proud of what Blackburn In Bloom has achieved. It goes to show what can be achieved when we work together and it is a fantastic honour to be through to the nationals.”

Councillor Phil Riley, Executive Member for Growth and Development, said: “The key to this success has been the hard work and dedication of our fantastic gardeners, teamed with really successful partnership working in the town. I’d like to thank and congratulate everyone involved – this really is superb news for our town.”